These Churches were all listed in the 1962 Bicentennial Booklet.

First Church of the Nazarene 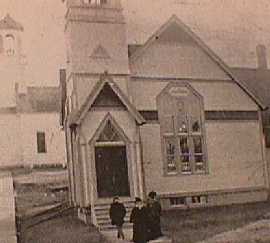 The First Church of the Nazarene of Bowdoinham, was started on Sunday afternoon, August 8, 1948 when a series of revival meetings was held in the unused Universalist Church.

The preacher was Rev. Harland C. Joyce then Pastor of the Richmond Nazarene Church and Mr. Nelson Brown of Fairfield, Maine as song evangelist. With the help of members of the Richmond Nazarene Church and from other Nazarene churches in the area, interest grew as each meeting went by until at the end of the ten-day meeting the building was nearly filled with many from the local community attending.

Pledges were taken to indicate whether it would be possible to start a church and the response was sufficient to continue meetings every Sunday afternoon. After several months there was enough interest from the community to warrant the organization of a Nazarene Church and this occurred in Nov. 1948, with Mrs. Elizabeth Allen, Laura Temple, and Ray Estabrook as trustees.

The church as it appeared when it was the Universalist Church. Seen entering are Capt. and Mrs. Benj. Adams and his sister, Cleora Adams about 1900.

Later the home adjacent to the church was purchased as a parsonage and Rev. Harland C. Joyce resigned the Richmond Church to come to Bowdoinham as a full time pastor in the fall of 1955.

The church stands for the Wesleyan doctrines of Entire Sanctification and Holiness as taught by John Wesley.

The church continues to grow and much repair work has been done on the building in the past few years. 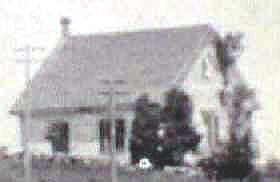 This church was built in 1874 and sold at auction July 1, 1925 to George A. Hackett who took the building down in 1926. It was called the "new church" or East Bowdoinham Free-Will Baptist. Among the last pew holders were Mary Webber, Anson Given, and George H. Hackett. It was situated nearly opposite the Pine Knot built by Zina Maxwell, on the River Road approximately three miles from Bowdoinham Village. 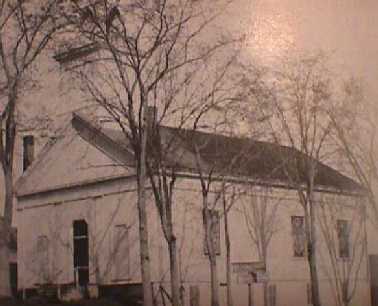 The Methodist Episcopal Church was one of the earliest church groups in the town of Bowdoinham. In the second half of the 1700's, two churches were built in the east part of town. The first one, ten years in the building, burned soon after it was completed. The second was later abandoned and became part of the barn on the property next to the Maxwell Cemetery on the River Road to Richmond. A seating plan exists of the second church dated 1799.

In the village, the society held services in the Union Church, now the Town Hall, until 1849, when a building of their own was erected on the northwest corner of Main and Center Streets. This building was in continuous use for nearly one hundred years until Sunday, November 24, 1935, when it burned after the evening service. The society disbanded in 1941 and the records were sent to the Richmond Church. 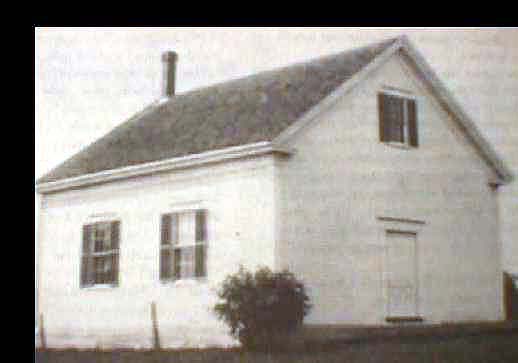 The Old School Baptist Church is located on a lot of land at the corner of the East Bowdoinham Road and the River Road.

The deed of land was dated February 14, 1884 in which John S. Gray conveyed to the Old School Baptist Society the right to build a church. The church was built between 1884 and 1886 and dedicated in 1886. The records of the Pre Destinarian Baptist Church were destroyed by fire at the home of Hiram Campbell before 1862. After that time services were held at the schoolhouse on the Abagadassett Road at the "Meeting House on the Hill" and at the home of Elder Leonard Cox.

After 1862 the ministers were: Elder John A. Badger Elder Leonard Cox and Elder Zacheus M. Beal. Elder Beal was called to the pastorate in 1904 and he served as Pastor until his death in 1924. From that time until 1958 only visiting pastors held meetings at the church. In 1958 Elder Arthur Warren of Maryland was called to the pastorate and he is serving as pastor at the present time for the annual meetings.

The old School House Baptist Church on Clay Hill as it appeared soon after construction in 1884. Building is now being restored by the Historical Society. (Photo submitted by Gretchen Hatch)

The Second Baptist Church was formed Dec. 21, 1820 at so-called Cathance Landing, now Main Street, Bowdoinham, with 27 charter members. This church soon became what was known as the new School Baptist, and separated themselves from the old creed in 1834. The new church building was dedicated in June 1837.

The organ was built by the William B. C. Simmons Co. of Boston in 1850 and was almost certainly designed expressly for the building. It was reconditioned in 1959 by Peter R. Perkins of Portland. Originally the organ was operated with a hand pump, but an electric blower was installed a few years ago.

A Baptist Association was organized in 1787 of only three churches from Bowdoinham, Thomaston and Harpswell. It took its name from that of the town where it was formed, and has, up to the present time, been known as Bowdoinham Baptist Association. The Association now comprises the churches of Bowdoinham, Topsham, Harpswell, Woolwich, Five Islands, Georgetown, Montsweag, Lisbon Falls, Freeport, the Corliss Street Baptist and First Baptist Churches of Bath.

The church has a Women's Missionary Society which meets monthly, a Sunday School with average attendance of 100 and the Baptist Youth Fellowship with three divisions: Senior, High School ages, Junior, ages Fifth through Eighth Grades, and Junior of ages Third and Fourth Grades.

The present pastor, The Rev. John Young, with his wife and two children, came to Bowdoinham in July 1960 from Philadelphia, Pa., where he was an associate pastor. He graduated from Westminster Seminary. He was ordained at special ceremonies in October 1961.

the building now known as the Town Hall . . .

I remember as a handsome church.

The pews had doors.

It was the Union Church,

There were pointed windows,

the church had three pulpits,

choir gallery over the

into it from an ante-room.

The Baptists were older,

and held services in school houses;

To the small church on Clay Hill,

who built and owned the steam saw mill,

to which and in which

to speak to the people of

had a belfry and a bell.

I remember it well.

and heard the ringing 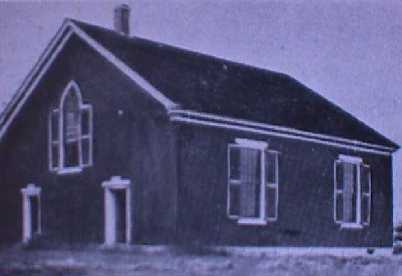 The Third Free-Will Baptist Church of Bowdoinham was organized July 5, 1836. They held their Quarterly Meetings and Conferences at the Ridge School House, on July 20, 1836 Articles of Agreement were signed for the building of a meeting house. This meeting house was dedicated on July 12, 1838. Rev. Silas Curtis preaching the sermon. In 1895 the old meeting house was repaired and rededicated during the pastorate of Rev. Humphrey Small. The church was in quite regular use until 1914 and since then usually one or two services have been held there each year.

In the early records of our town we find that the minister was hired by the town, and the money appropriated for that purpose in the annual town meeting. The custom lasted for about 30 years, 1768 to 1800. The Rev. Mr. Dennis was the first minister in town. In 1765, townspeople voted to build its first meeting house. Ten years later, the meeting house was burned, and until 1797 public worship was held in private houses.

In 1797, the town voted to build another meeting house and two years later, in 1799, this house was dedicated. The church was located near Halls' Corner, but has now gone out of existence. In this church were held the first town meetings for several years after completion. Previous to 1800, all town meetings were held in private homes.

The OLD SCHOOL BAPTISTS are steadily progressing on their new Church near the residence of Charles Jordan atop Clay Hill. Quite a sum of money has been raised for its erection. John F. Gray gave the lot. (BA) Apl. 18, 1884.

Reverend ELIZAH KELLOGG preached a very eloquent discourse from the Baptist desk Last Sabbath Day afternoon before a crowded house. His text was Isah. 64-6. The topic: "We all do fade as a leaf." (BA) Oct. 31, 1884.

The ladies of the Baptist Society will give a crazy supper at the Town Hall, May 11. One of the attractions will be a scene depicting the interior of an old fashioned kitchen. All are cordially invited. The cost is fair at ten cents. B. A. May 5, 1887

The Baptist Church is undergoing thorough repairs. The shingles were a present from E.P. Kendall. Bowdoinham Advertiser, April 21, 1887

The Baptist church has a new top and a new bottom to it, and the building is now as solid as the doctrine preached within it. Bowdoinham Advertiser, May 5, 1887

A new Furnace will soon be placed in the Methodist Church. This is much needed, as the one now in use will not even make the audience room comfortable during the coldest weather. A collection was taken last sabbath and $56 raised for this purpose. The furnace will cost nearly $150.

While in the Universalist Church last Sunday, we noticed with great distaste that the floor was badly stained with tobacco juice. We suppose this act to have been done by persons who were in the audience at last Friday night's meeting. We cannot find words sufficiently strong to express our condemnation of the parties who are guilty of this filthy practice.

These persons should remember that the hall is used as a church, and remembering this, they ought to have respect enough for God's house to keep it clean and not desecrate it in so foul a manner. In the future we trust these persons will remember that gentlemen who expectorate on the floor can not expect to rate as gentlemen.