Bridges were important to the town of Bowdoinham. These accounts will help you to understand how much these bridges meant to the town. 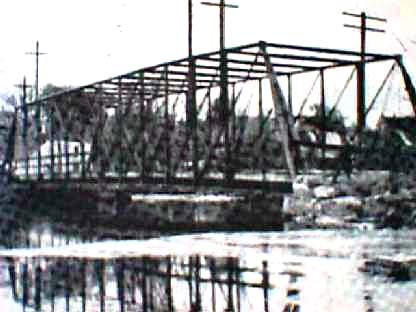 Clips from the Advertiser

The ice went out of the Cathance on Monday April 14. The mill bridge came near being carried away by the late very high freshet. The bridge is now being temporarily supported by logs and chains. (BA) Apl. 18, 1884.

JOSIAH FULTON is decorating the mill bridge with a thick coat of brown Paint and has afterwards given it a liberal sprinkling of sand. We trust the grit will protect it from the depredations of the love-lorn youth's jack knife. (BA) Aug. 28, 1884.

In a late issue of this paper we called attention to a defective railing upon the "LONG BRIDGE", but our esteemed Street Superintendent informs us that no such bridge is known upon the Town Maps. To clear up the muddle, we hasten to explain that the Bridge we alluded is, we believe, the longest bridge in town. That Structure commences at Mill Street, near the Kendall Bros, GRIST MILL, and extends across the roaring Cathance to WILLOW WALK, thus uniting Railroad Avenue on the west with Brooklyn Boulevard on the east.

This bridge, by reference to the History of our Town, seems to be one of the oldest, and the rail has just become feeble with age. We have several times lately attempted to lean upon that rail to inhale the sea breeze, but its creaking warned us of danger, so we turned away, having no desire to drop down into 40 feet of water and surprise a family of eels just sitting down to dinner. We hope this bridge might now have a new rail. B.A. Nov. 24, 1887

Our county commissioners, S. W. Carr, Dyall Bibber and N. S. Purington, have engaged John P. Rideout, Bowdoinham, to fill in eight of the spans of the BAY BRIDGE. The project will cost $6,000, and will comprise seven spans on the east side of the center island, and one on the west. The project will run a total of 400 feet in length, requiring about 4,000 cubic yards of stone and earth fill.

The Bridge Over the Cathance

On March 25, 1805, an act was passed by the Massachusetts Legislature incorporating Zacheus Beals, Josiah Colby, James Fulton, Elihu Getchell, Robert, David and William Patten, Thomas Teed, Joseph Sprague, and James Sampson as "proprietors of Cathance Bridge," to erect a bridge over Cathance River at the termination of the road laid out by Topsham to the landing at Bowdoinham, said bridge to be 12 feet high above high water across the channel.

The tolls authorized were:

EDITOR'S NOTE: In October of 1934, Llewellvn N. Edwards, Senior Highway Bridge Engineer for the U. S. Bureau of Public Roads, wrote a technical paper for the University of Maine in which he outlined the history of six early and historic Maine bridges. Featured in that paper was the cast iron bridge that once spanned the Cathance at Bowdoinham.

Following is the report Edwards wrote for the University.
Frank Connors

The Iron Bridge over the Cathance River, at Bowdoinham, is located upon the site of a previously existing wooden structure known as the Kendall Mill Bridge. The superstructure of the Iron Bridge is of special interest for the reason that it is the first and only "cast-iron" bridge ever erected in this state. This unique type of metal truss was developed by a Squire Whipple, and was described as his "trapezoidal" truss. Squire Whipple is commonly referred to as "the father of metal truss bridges", because of his successful pioneer efforts in that field.

The cast-iron end posts of this span are marked as follows: J. Hutchinson, Builder, Troy, New York, 1866. This company built many bridges of the Whipple bowstring and horizontal chord types.

Bowdoinham's unique cast-iron bridge as it appeared about 1930. The 144-foot, wooden-decked span erected in 1895, and replaced about 1950. It is reported that only three cast-iron bridges were ever constructed in this country, and Bowdoinham's was the only one in Maine (Photo Courtesy of the University of Maine)

This cast-iron bridge was originally erected at some other location, probably in Massachusetts or Connecticut, where, after having served its purpose until considered inadequate*, it was disassembled without injury and replaced by a structure more adapted to local requirements.

The town of Bowdoinham at its annual town meeting March 4, 1895 authorized the replacement of the Kendall Mill Bridge and appointed a special committee to investigate alternatives. In that same year, and acting on the report of the committee, the Town purchased the cast-iron span complete from the Berlin Iron Bridge Company, Berlin, Connecticut, and it was re-erected in its present location under the direct supervision of John Towne, an engineer-salesman of that company, at a total cost to the town of $3,885.52.

The length of this span is 144 feet, 3 inches, and the widths of the roadway and one sidewalk are 20 feet and 5 feet, respectively.

In view of its historical status and excellent service record, it seems proper to suggest that when Bowdoinham's cast-iron bridge has completed its second service period and is to be again replaced by a more modern structure, it may very properly be again disassembled and re-erected to serve as a bridle path or pedestrian bridge, with a permanent marker identifying its value as an engineering relic. From an historical and scientific point of view, this is the most interesting metal bridge structure now existing in Maine.

NOTE- The old cast iron bridge was dismantled about I950 and replaced first by a temporary pontoon bridge, and finally, by the bridge which now spans the Cathance to Brooklyn. The bridge was sold for scrap.

The Bridge Over Merrymeeting

The Merrymeeting Bay Bridge was constructed in 1835, a crudely engineered, wooden span over the Androscoggin River between Topsham and East Brunswick. For more than 60 years, the half-mile long toll bridge served as a short cut between upper and lower Sagadahoc County, as a link between the agricultural upper towns and the expanding city of Bath.

Martin Hall of Bowdoinham was the original contractor on the bridge. Owen's History of Bath says, "The bridge was constructed at a cost of about $20,000 . . . Bath assisted in the venture and became a principal corporate partner in the enterprise," by purchasing 160 of the 425 shares of common stock offered in the initial sale.

The bridge was 2,700 feet in length, with a wooden deck 24-feet wide. It was supported first on wooden pilings set 20 feet apart in the shifting river sands; then, when ice and currents became a problem, rocks were added around the pilings to protect them. Still later, improvements projects on the bridge led to replacement of the wooden pilings with granite block supports.

Unfortunately the Bay Bridge was never a financial success; maintenance costs always seemed to outstrip income at the toll booth. In 1837, when the bridge was barely more than a year old, Bath was forced to borrow money to meet an assessment against its stock for major repairs.

In 1842, Bath's representatives to the bridge corporation returned a statement to the town showing that on January 1 of that year, just $34.27 remained in the treasury after the toll keeper's salary was paid and each of the stock holders was credited with a $2 dividend.

In 1846, Bath authorized a loan not to exceed $10,000, "to meet the assessment that may be made on the town's shares to repair Merrymeeting Bridge." And that amount was needed to cover only Bath's share! It has been estimated that in the 50-year history of the bridge, more than $1 million was spend on the construction, repairs and maintenance of the span.

Tolls were never sufficient to meet the bridge expenses for two reasons. First, there was the nearly annual spring freshet on the Androscoggin River which frequently damaged the bridge, and sometimes carried away one or several of the spans completely. Secondly, the bridge owners had to sit idly by each winter when the river froze, and travelers took to the ice instead of the toll span.

If floods and ice weren't enough, the bridge owners soon discovered that the shifting sands of the river bottom would be another constant source of problems. Spans and piers were vulnerable to undermining, and as proprietors fought washouts with backfilling, they were usually distressed to find that their filling operations simply caused new problems and pressures against another section.

The first toll keeper on the bridge was John Foster, who held the position about ten years. Samuel W. Foote tended the bridge from 1851 until 1875. Lewis Thomas kept it for five years, Thomas Nutter for nine years (both dates are unknown), and Lydia Young was keeper when the bridge went out with the freshet of 1896.

An 1858 map of Sagadahoc County shows the toll keeper's house on the Brunswick side of the bridge, yet we do know that tolls were also collected in Topsham. The location of the toll house usually depended upon who was taking tolls at the time, and if the keeper happened to live in Topsham or in Brunswick or Bath.

A Brunswick newspaper reported the launching of a brig named the Carrie Purington at Topsham above the bridge in 1870. The ship owners brought their new vessel downstream, only to find the channel under the draw span blocked by a sand bar. The Purlington had to be anchored off Mustard's Island until a regular span of the bay bridge could be removed. This was finally done, and the Purlington did reach salt water, but we learn from this report that the Bay Bridge must have been a problem to shipbuilders, fishermen and merchants who wanted to use the river above the span for sailing vessels.

By 1864, the last of the private stockholders became fed up with their investment and abandoned all interest in the span to the City of Bath, which bore the considerable burden of financial responsibility until 1875.

In 1875, one span of the bridge was carried off by spring ice, and Bath, seemingly fed up with its burden, voted to spend no more money on the bridge unless a new method of shared financing could be arranged.

For three years, the bridge stood unused and in disrepair until 1878, when the state legislature stepped in and decreed that Bath could give the bridge to Sagadahoc County if the voters of the county approved the idea in a county-wide referendum.

Sagadahoc County towns voted the question in March of 1878. Bath, Bowdoinham and Arrowsic voted yes, while the rest of the county said no, but the vote in Bowdoinham was a unanimous endorsement of the plan, and Bath had just 11 opposition votes, so the two municipalities carried the day and Sagadahoc County became the owner of the Merrymeeting Bridge.

The county commissioners let a contract to rebuild the bridge in April of 1878, and later that same year, the bridge was reopened. Under the commissioners' direction, many of the old wooden spans were replaced with metal sections.

The county maintained the bridge until 1896, when ice and flood waters of a spring freshet carried off several sections of the bridge and its piers. Several votes were held in an attempt to rebuild the bridge, but all of them failed. Merrymeeting Bay Bridge was never reopened.

Our county commissioners, S.W. Carr, Dyall Bibber and N.S. Purington, have engaged John P. Rideout, Bowdoinham, to fill in eight of the spans of the BAY BRIDGE. The project will cost $6,000, and will comprise seven spans on the east side of the center island, and one on the west. The project will run a total of 400 feet in length, requiring about 4,000 cubic yards of stone and earth fill.